The catacombs are subterranean systems of rock-cut hallways and niches, excavated to house the bodies of the dead who could not afford a flashy tomb above the ground. The catacombs were not, contrary to popular belief, used by the Christians as hideouts during the pagan persecutions. The most well-known are the Christian catacombs concentrated along the Via Appia Antica, although there were Jewish catacombs as well. Admission to the catacombs includes a guided tour, which you must stay with if you ever want to see daylight again. We recommend the Catacombs of San Callisto. 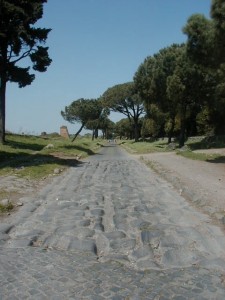 Known as the “Queen of Roads” (regina viarum) throughout antiquity, the Via Appia was built in the 4th century BC to link Rome with Capua in Campania, and eventually Brindisi on the Adriatic coast. The section of the ancient Appian Way from Porta San Sebastiano down toward the Grande Raccordo Anulare remains a very evocative and refreshingly green place to visit catacombs and ruins or simply stretch your legs. Especially peaceful on Sundays when the road is closed to automobile traffic-consider renting a bike to explore this parkland and give your feet a rest. (Best to visit during daylight hours, before the prostitutes and other unsavory characters begin to populate the road.) To get to the Appian Way, take Metro B to Circo Massimo or Piramide, then bus 118 (puts you near the catacombs), or Metro A to Colli Albani, then bus 660 (puts you near Cecilia Metella and the Villa of Maxentius).

The information office of the Parco dell’Appia Antica, just outside Porta San Sebastiano at Via Appia Antica, 42 (tel. 800 028000), provides maps and informative pamphlets about the ancient road and organizes tours and activities for children. Open Mon-Sun 9am-6pm.

(Museum of the Roman Fortification Walls)

The best thing about this museum was that it allowed you to walk along the embattlements of the 3rd century AD Roman walls, where you could enjoy a nice view of the countryside as well as keep an eye out for invading Visigoths. Unfortunately the walkway has been closed indefinitely for safety reasons since 2001, what’s left is a small museum of artefacts connected to Rome’s walls and roads. Porta San Sebastiano, Via San Sebastiano, 18 (06 70475284). Open Tu-Sun 9am-1.30pm. €3.

A small church about half a mile south of Porta San Sebastiano, built on the spot where Jesus is supposed to have appeared to the apostle Peter-in flight from Rome and crucifixion-and shamed him into going back to the city. St. Peter is then believed to have been crucified, upside-down, in the circus of Caligula and Nero in the year 64 or 65 AD. Just inside the door you’ll see two footprints in the pavement, supposedly left by Christ when he had the chat with Peter.

Villa and Circus of Maxentius and Mausoleum of Romulus

Before Constantine knocked him out in 312 AD at the battle of the Milvian Bridge, Maxentius held the title of “emperor” for a while, living long enough to build his family a nice suburban sprawl along the Appian Way. The complex consists of the villa proper, the 10,000-spectator chariot race track (with great views of the surrounding countryside), and the tomb of his beloved son Romulus (no relation to Remus). Via Appia Antica, 153 (06 7801324). Open Tu-Sun,  9am-1pm. €3

Further down the Appian Way a squat, round structure with medieval crenellations comes into view. This started out as a funerary monument to a wealthy young lady of the 1st century BC; in the 1300s it was converted into a fortress. Via Appia Antica, 161 (06 7844271). Open Tu-Sun 9am-6:30pm (Oct-Mar 9am-3.30pm). €6 (it includes Villa dei Quintili and Terme di Caracalla) 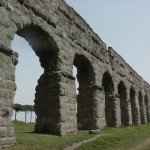 Located off the Via Appia Nuova (a parallel Appian Way, east of the ancient road) is a public park set among the arches of ancient and Renaissance aqueducts. The Parco degli Acquedotti is as close you can get to aqueduct ruins anywhere in the Roman region. A bit out of the way, but an impressive and tranquil spot once you get there – see photo p. 2). Viale Appio Claudio (off Via Appia Nuova).