The Fascinating World of Fascist Architecture 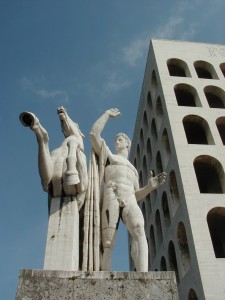 Relax-you don’t need to subscribe to any totalitarian ideology to delight in the striking architectural creations from the fascist era strewn around Rome.  Mussolini’s reign lasted two decades (from 1922 to 1943), and he certainly saw to it that he had an impact not only on Italy’s history but on its architectural record as well.  So, once you’ve had your fill of ancient ruins and baroque churches, tune into the stark, bizarre, and often campy world of l’architettura fascista.

In Rome, the capital of the “fascist empire,” Mussolini’s grand scheme was to transform the city with propagandistic buildings and urban stages whose look and feel would broadcast his achievements and objectives.  (This is exactly what the Roman emperors and the popes of the Catholic church had done for centuries, of course; without the inflated egos of so many past rulers, Rome would not be the monument-filled feast for the eyes it is today!)  Architects in the 1920s and ‘30s took their cues from the forms of classical Roman buildings, but whereas the enormous structures of imperial Rome have ornate details and rounded edges that give them a certain Mediterranean warmth, fascist buildings are Teutonic blocks of unrelieved travertine, which makes them cold and forbidding.  (If you’ve ever seen a photograph of Mussolini, you’ll notice that the resemblance is uncanny.)

The best place to view these urban icebergs is in Eur, a suburb (about 8km south of the centro storico) that was developed to be a world expo of the glories of fascism.  Well, that big expo-planned for 1942-never happened, but a lot of the buildings were eventually completed anyway.  Hop on metro line B (in the direction of Laurentina) to any of the Eur stations (Magliana, Palasport, or Fermi), and walk around the strange and severe cityscape of government buildings, insurance offices, conference centers, and museums, including the fascist-era Museo della Civiltà Romana (see our listing on p ##), with its fascinating models of ancient Rome.  The most dramatic landmark in Eur is the 68m-tall Palazzo della Civiltà del Lavoro, the so-called “Square Colosseum,” which many visitors to Rome see on the ride in from the airport.

For a much more lighthearted look at fascist architecture, take tram 2, or bus 32, 271, 280, or 910 to the Foro Italico sports complex (on the west bank of the Tiber river, about 3km north of the centro storico).  The Foro Italico is best known for being the home of the Stadio Olimpico-where Rome’s two Serie A soccer teams, Roma and Lazio, play-but the entire facility was conceived as a sprawling paean to athleticism, a major tenet of fascism. The real must-see at the Foro Italico is the Stadio dei Marmi, a small track and field arena just north of the Stadio Olimpico.  The track is surrounded by 60 fascist-era marble statues of scantily-clad musclemen clutching various sporting goods and striking ridiculously vain poses.  The Foro Italico’s pedestrian esplanades are citizens playing sports or performing calisthenics. As if there were any doubt left about who was behind all this rhetoric, the word DVCE appears ad nauseam in the mosaics, and the huge marble obelisk that marks the entrance to the Foro Italico still bears its original inscription, MVSSOLINI covered with wonderfully entertaining (and remarkably well-preserved) 1930s mosaics of model fascist DVX.