Some of the most important and beautiful things in Rome can be experienced gratis. Among the sights that are always free: the Roman Forum, the Capitoline Hill, Trevi Fountain, the Spanish Steps, the Pantheon, the exterior of the Colosseum, the exterior of Castel Sant’Angelo, the Mouth of Truth, Piazza Navona, and St. Peter’s Basilica. And, of course, every church in Rome is free, so whether you have a passion for mosaics, paintings, sculptures, or martyrs’ bones and relics, there are world-class examples of each inside almost every church in the historical center. Also, don’t forget the parks; they’re a great escape from the traffic and crowds that dominate the tourist areas.

On the last Sunday of each month, the Vatican Museums and the Sistine Chapel are also free.

AND FOR THE EUROPEANS…

EC citizens aged 18 years and under or 65 and over are entitled to free admission to most of the museums and monuments of Rome on production of a passport. 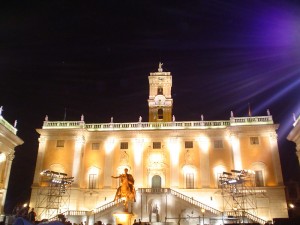 This spectacular Renaissance piazza is one of the best spots in Rome, especially at sunset and later. In the middle of its Michelangelo-designed pavement, you’ll find a bronze statue of the Emperor Marcus Aurelius on horseback (a beautiful copy of the original which is now inside the Capitoline Museums-see p. 18). From the terraces on either side of the Palazzo Senatorio there are powerful views over the Roman Forum.

Look down from the west over all of Rome’s monuments. Reach the summit by walking from Via Garibaldi, Trastevere. The cannon goes off every day at noon- so don’t panic if you hear a big bang! Bus 115 from Trastevere or 870 from Piazza Fiorentini (off Corso Vittorio Emanuele, where it meets the Tiber).

The Orange Garden (Giardino degli Aranci or Parco Savello) is one of Rome’s most picturesque gardens, with a beautiful view over Trastevere. Just down the street (about 20m from the end, on your right) from the Orange Garden, you’ll find a small key hole in a large green door that offers a delightful view through a grove of trees to the dome of St. Peter’s. Metro B: Circo Massimo, then walk north along the Circus Maximus and turn left up the hill (Via Valle Murcia to Via di Santa Sabina).

Part of the gardens of the Villa Borghese, raised up above Piazza del Popolo, near the Spanish Steps. From here there is a unique vista over to St Peter’s and the Vatican. Metro A: Spagna.

Another fantastic view is from the Palatine Hill, above the Roman Forum. It does cost ¤8 to go to this magnificent spot, but it’s well worth it (see p. 15). The newly restored Tabularium, the ancient hall of records on the Capitoline Hill has an incredible view of the Forum. The Terrazza Caffarelli at the top of the Capitoline Museums (open to non-museum-goers) has a commanding view to the west, perched on the same cliff face as the Tarpeian Rock, hurling-off point of ancient Roman traitors.

Tourists may find it hard to believe, but Rome is the greenest large city in Europe. You don’t need to go far to find the parks; a whole new world of trees, shade, peace and quiet awaits you in areas immediately north, west, and south of the historical centre.

Huge park with long avenues of trees and picturesque villas, which double as museums and galleries, dotted throughout. If you don’t have time to wander through all of it, at least go to the Pincio, the look-out above Piazza del Popolo (see p.46). Metro A: Spagna or Flaminio.

Surrounds Nero’s Palace (the Domus Aurea). Avoid on Sundays, when it turns into an immigrant drinking festival. Metro B: Colosseo.

A bit far from the centre, but popular with runners. Open from dawn to sunset. Bus 38 or 310 to Piazza Istria.

A beautiful villa and garden, once Mussolini’s family residence, it then fell into disrepair and is now being restored. The garden contains many exotic plants and large trees. A new museum has opened in the Casina delle Civette, remarkable for its stained glass windows. Bus 36 or 62 to Via Nomentana/Torlonia.

– La Pergola at the Cavalieri Hilton. Rated the number one restaurant in Rome year after year, La Pergola amazes not only with its views from Monte Mario over city to the east, but with the sublime tastes that Heinz Beck (one of the best chefs in the entire world) creates night after night. Reserve at least a week in advance, and prepare your wallet for a serious shock.

– Les Etoiles. Near the Vatican, this rooftop restaurant makes you feel as if you could reach out and touch Michelangelo’s majestic dome at St Peter’s.

– Sette at the ES Hotel. Panoramas stretch south to the Castelli Romani hill towns; below, watch the hypnotic coming and going of trains at the city’s main rail terminus.

– Hotel Eden. Enrico Derflingher, a former White House cook, heads up the kitchen here, with great views to the west.

– Hotel Forum. The best spot for a gourmet meal above the ancient ruins.

– Hotel Raphael (near Piazza Navona) and the Grand Hotel de la Minerve (near the Pantheon) offer open-air dining above the palaces and churches of the centro storico.

– Hotel Hassler Villa Medici. Right at the top of the Spanish Steps–perhaps the most celebrated dining spot of all.

Budget travellers, beware: For views like these-as well as some of the most celebrated chefs in the land-be prepared to splash out.  But, as the Romans would say, “si vive ‘na vorta sola”-you only live once!

A small and serene villa, raised up with a great view, provides tranquility in the heart of the city. At the bottom of Via Nazionale, entry on Via Mazzarino. Bus 40 Express or 64 to Via Nazionale.

A beautiful villa between the Colosseum and the Baths of Caracalla, it also hosts a jazz festival in the summer months. Metro B: Colosseo.

Excavations carried out in the late 19th century unearthed the remains of the tombs of the Scipios, an influential Roman family in the 3rd century BC. Nowadays just a pleasant stretch of greenery and intermittent archaeological sites between the Baths of Caracalla and the Appian Way.

This huge park dating back to the 1600s, redone in the mid-1800s, has formal gardens and lawns and is popular with runners and dog-walkers, although it is a bit far from the sights. Bus 40 Express to Chiesa Nuova, or 64 to the end of Corso Vittorio Emanuele, then bus 870 from Piazza dei Fiorentini, or walk up over the Janiculum from Trastevere.

A huge stretch of undeveloped land between the Via Appia Antica and the Via Appia Nuova. Ride a bike or jog past beautiful, rustic villas, bits of ancient structures, and farmers (who actually make a living off the land and will sell their homemade cheese to interested passers-by). Bus 118 to Via della Caffarella.