Ruins, relics, churches, chapels, fountains, frescoes, towers, temples, castles, and catacombs – whew!  The Eternal City has many more sights than anyone has time to visit. As the Italians say,  “Roma, non basta una vita” (Rome, a lifetime is not enough), as even the most dedicated of native Romans is unlikely to have seen it all. So what should you see while you’re here?  Well, once you’ve covered the “greatest hits” of Roman tourism (indicated with III below), the rest is up to you!  Organized by category (monuments, museums, churches), the following list is by no means complete, but it’s a good start!

Rome doesn’t have a comprehensive museum pass, but there are a couple of combination tickets available from sites administered by the Archaeological Superintendent (information in English and Italian 06-39967700).  Tickets can be bought from any of the monuments or museums listed below.

• 7-day ticket for all three locations of the Museo Nazionale Romano:  €9

Recently the City of Rome has launched the Roma Pass, a tourist card offering various services and discounts.

NB. All state museums and art galleries offer free entry to citizens of European Union countries under 18 or over 65. 18-25 year old EU passport holders get a 50% discount. These rates are also extended to countries with reciprocal agreements e.g Australia, so if you’re eligible don’t forget your passport.

WHY’S EVERYTHING IN RUINS

Thinking of Rome, ruins inevitably spring to mind. But how come they’re all ruins? Easy- old buildings fall down. Well, sort of. Er, Second World War bombs? Nope, not at all (only the station and the surrounding area suffered in Rome’s one night under (Allied) bombing). Really Rome has simply been eating itself for well over one and a half millennia; the Renaissance and the medieval city fed remorselessly and relentlessly on the Imperial and the Republican city. So as you go around the Forum and wonder where it all went, just look around the rest of the city- ancient columns support the roofs of the older churches, more columns were chopped up to make coloured marble church floors (try looking down in the Sistine Chapel), the façade of St. Peter’s is built with parts of the Colosseum. For over a millennium lime kilns converted ancient limestone into plaster and cement. So in the Forum the surprise isn’t  so much what’s missing; it’s really a miracle there’s anything left at all.

The granddaddy of all Roman monuments, this arena known to the ancients as the Flavian Amphitheatre hosted 450 years of gladiatorial contests and wild beast hunts… “games,” as they were called in antiquity. You can get a pretty good sense of the Colosseum just by walking around the outside, but going inside will give you a better idea of the seating areas, the structures beneath the arena floor, and the general enormity of the building. Piazza del Colosseo. (06 7005469) Open daily 9am-7.30 pm from end of March to 31st August, September until 7pm, October until 6.30pm, from the end of October until mid-February until 4.30pm, mid-February until the end of March until 5pm. Last admission 1 hour before closing time. € 11 (includes the Palatine Hill and the Roman Forum); €12 if there are exhibitions. Metro B: Colosseo, or bus 60, 75, 85, 87, 175, 571, or tram 3.

*Hot insider tip: When the queue at Colosseum is dispiritingly long, walk down over to the Palatine hill ticket booth in Via di San Gregorio; buy your ticket there and go back to the Colosseum. With ticket in hand, you’ll be able to go straight in.

This is where Rome began, back in 753 BC when Romulus killed Remus. The Palatine Hill was the best real estate in ancient Rome (the emperors chose to live there, after all), and it’s still one of the best locations today. The visit here is part ruin-exploration, part nature hike, so take a book or a (surreptitious) picnic, relax in the sun or shade, and enjoy one of the most serene and splendid views over Rome. Entrances at Piazza di S. Maria Nova (Arch of Titus) and Via di S. Gregorio 30. (06 699841). Open daily with the same complicated opening hours as the Colosseum (see above). Last admission until 1 hour before closing time. € 11 (includes Colosseum and Roman Forum admission as well as the Palatine Museum); €12 if there are exhibitions. Metro B: Colosseo, or bus 60, 75, 85, 87, 175, 271, 571, or tram 3. 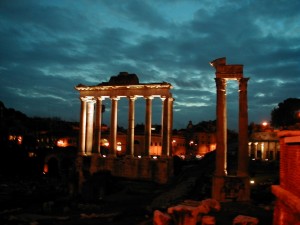 This was the downtown area of the ancient city, where you could cross paths with Caesar himself on his way to the political, religious, and commercial buildings which are still visible here today, 2000 years later, in various states of preservation. Very evocative of the power of Rome in her Golden Age. Entrances at Largo Romolo e Remo 5-6, Piazza S. Maria Nova (Arch of Titus), and Via del Monte Tarpeo (Capitoline Hill). (06 6783904) Open daily 9am-one hour before sunset. Admission until 2 hours before closing time. € 11(includes Colosseum and Palatine Hill); €12 if there are exhibitions.  Metro B: Colosseo, or bus 60, 75, 85, 87, 175, 271, 571.

Mamertine Prison.  Just above the northeast corner of the Forum is the so-called Tullianum, where the apostles Peter and Paul are said to have been imprisoned before being sent to their martyrdoms. 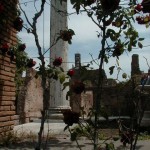 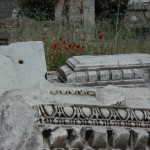 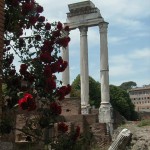 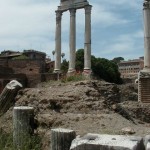 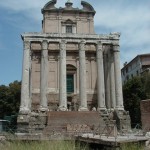 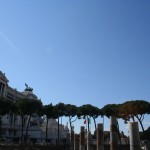 After a decade, the controversial restoration of the Ara Pacis Augustae has been completed and is finally open to the public. The monument is housed in a structure designed by American architect Richard Meier and incorporates glass , concrete and Roman travertine marble. Inside this structure one can view the sacrifical altar commissioned by the first emperor Octavian Augustus  in 9 B.C. to commemorate his victories in Spain and Gaul and to show to his intention to ensure peace and stability troughtout the empire. The altar is decorated  with reliefs depicting historical and mythological scenes. On the east side is the beautiful relief of Tellus (Mother Earth) with her twins seated on her lap.. They are surrounded by two nymphs: one seated on a swan, the symbol of air, and the other seated on a sea monster, the symbol of water.. The Emperor’s family is also portrayed while attending a procession togheter with priests, senators, and Vestal vVrgins. The impressive building also houses and auditorium, an exhibition space and a roof-top cafè overlooking the Tiber river. Open Tue-Sun 9am-7pm . € 11 (ticket office closes one hour earlier). 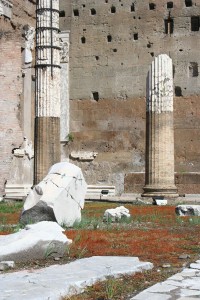 This area immediately east of Piazza Venezia and the Capitoline Hill was developed in the 2nd century AD and included a massive basilica, Greek and Latin libraries, a temple, Trajan’s column, and a sophisticated marketplace. The column, widely regarded as one of the greatest works of Roman art, and the markets, known to archaeologists as the world’s first shopping mall, are in excellent states of preservation today.

You can get a free view of the complex (including the rest of the Imperial Fora) from Via Alessandrina (off Via dei Fori Imperiali), but there is an admission fee to roam around the three-storey complex.

The best preserved of the imperial bath complexes. 1,600 bathers a day used the complex in its hey-day, the water hasn’t been running for 1,500 years but you can follow the path of the ancient bathers from the changing rooms to the caldarium, tepidarium, and frigidarium, then out to the exercise areas and libraries. The massive brick walls and remaining mosaics help you imagine what a grand experience bathing in Rome would have been. Via delle Terme di Caracalla (06 39367700). Open Tu-Sun 9am- 6.30pm  (until 3.30pm Nov-Mar); Mon 9am-2pm. €6  the ticket includes also the tomb of Cecilia Metella and Villa dei Quintili). Metro B: Circo Massimo or bus 118 or 628.

Domus Aurea (part of the complex stll under restauration)

The ruins of Emperor Nero’s legendary “Golden House,” which in its day occupied a private park covering  one-third of Rome, were finally reopened to the public in 1999 after 25 years of restoration work. Only 20 percent of the palace survives (and what’s left is completely underground) so an active imagination is necessary, nevertheless the Domus Aurea remains one of the most unique and impressive sites in Rome. Open Tue-Fri Closed Sat,Sun;mon. Booking essential. € 4,50. Via Labicana 136 (tel. 06 39967700 for reservations). Metro B: Colosseo, or bus 60, 75, 85, 87, 175, 271, 571, tram 3.

The Pantheon is simply one of the finest buildings in the world, and by far the best place in the city to experience the true splendour, harmony, and elegance of Roman architecture, inside and out. This 2nd-century AD pagan temple to all of the gods was consecrated as a church in 608 AD and today, nearly 1900 years after its construction, is still almost completely intact. From the piazza, admire the solidity and permanance of the imposing rectangular porch; inside, take in all the colours of the marble that lines the walls, and marvel at the vault of the hemispherical concrete dome, pierced by a 9m oculus, open to the sky. Also look out for Raphael’s tomb. Piazza della Rotonda (06 68300230) . Open Mon-Sat 8:30am-7:30pm, Sun 9am-6pm, holidays 9am-1pm. Closed Jan 1, May 1, and Dec 25. Free. Bus 40 Express, 62, 64, 70, 87, 492, 571 to Largo Argentina.

Other famous, postcard-worthy sights around the centro storico: 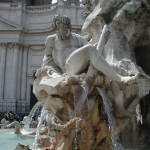 Built over the ruins of the 1st century AD Stadium of Domitian, Piazza Navona is the pride of Baroque Rome, with sculptural and architectural gems by the masters Bernini (the Fountain of the Four Rivers in the middle) and Borromini (Church of Sant’Agnese in Agone).  Best enjoyed in the morning, when the square hasn’t yet been invaded by the junk -merchants.  Sitting down for drinks or meals on the piazza is over-priced, but a morning cappuccino or pre-dinner prosecco is worth it. Bus 40 Express, 62, 64, 571 to Largo Argentina, or 30 Express, 70, 87 to Corso Rinascimento.

A seriously extravagant Rococo creation with travertine palm trees, tritons, seahorses, and Neptune himself. Throw one coin over your shoulder for a quick return to Rome, but don’t throw yourself in unless you want a hefty fine and a trip to the police station. Particularly nice when illuminated in the evening, but if you want it to yourself you’ll have to try around dawn. Metro A: Spagna, or bus 62, 175, or 492 to Via del Tritone.

This complex started out as the Emperor Hadrian’s mausoleum, then in the Middle Ages was converted into a fortress, and in the Renaissance was outfitted with papal apartments.  A funerary, military, and domestic monument all in one. Great views over Rome from the upper terrace, where Puccini set the tragic denouement of Tosca.  Lungotevere Castello (tel. 06 6819111). Open Tu-Sun 9am-7:30pm (last admission 6:30pm).  € 6.  Bus 40, 62, 64, 271, 280 to Ponte Vittorio Emanuele or Piazza Pia

Re-enact “Roman Holiday” at the Bocca della Verità, in the portico of the church of Santa Maria in Cosmedin. Put your hand in the mouth of this ancient sewer cover– legend has it that liars’ hands will be bitten off. Piazza Bocca della Verità. Open 9am-6pm (April- September); 9am-5pm (October- March) daily. Bus 30, 95, 170, or 271 to Via del Teatro di Marcello (or any bus to Piazza Venezia).  Opposite the Mouth of Truth is the Forum Boarium area (ancient cattle market), with two Roman temples preserved; the round one was dedicated to Hercules in the first century B.C., the rectangular one a century later to Portunus, the god of harbours.

The modern city has all but forgotten that there’s a river running through it, and while Rome’s waterway certainly isn’t the most picturesque in the world, it’s partly thanks to the Tiber that Rome grew to be the great power that she was in antiquity. Now you too can make like Romulus and Remus and float along the Tiber.  The Battelli di Roma (www.battellidiroma.it) offer a ferry-type service up or down the river, with stops underneath major bridges along the way. (Hint: Board at the southern end of the line, Calata Anguillara, and ride all the way up to the northern end, the Foro Italico. From there, take bus 271 or 280 back to the center.) One-way river boat trip (about 45 minutes): €1.  Just watch out for those water rats.