The Seven Kings of Rome 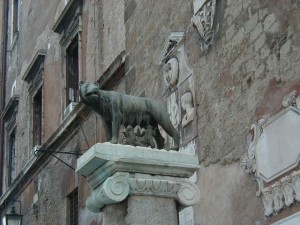 Romulus was the legendary eponymous founder and first king of Rome (conventional dates: 753-717/16 B.C.). The story of the twins Romulus suckled by a she-wolf, established at Rome by the third century B.C. may be native, although Greek motifs heavily influenced its development. To Romulus were attributed Rome’s early political and military institutions, and victories over neighbouring people including the Caeninenses, whose king he slew in single combat. His seizure of Sabine woman as wives for his men resulted in conflict and then co-rule with Titus Tatius. He was sometimes identified with the god Quirinus.

Numa, from Cures, was the second king of Rome (conventional dates: 715-673 B.C.). The name may be authentic but his portrait is a (priestly) stereotype. Though his establishment of priesthoods, cults, and rituals he represents the scrupulous (and simple) observance of public religious obligations. Stories accumulated of his debt to Pythagoras (fiercely contested on chronological grounds) liaison with the nymph Egeria, and various miracles. Alleged writings by Numa were “discovered” in 181 B.C.: they were promptly suppressed.

The third king of Rome (conventional dates: 672-641B.C.), Tullus’ re-awakening of Rome’s military ambitions and institutions of associated rituals (including the fetial procedure) were probably suggested by his name (latin “hostis” means enemy): his campaigns, including the conquest of Alba Longa, reflect only later conceptions of Rome’s early expansion. He also reputedly constructed the senate house (Curia Hostilia) and neighbouring Comitium.

The fourth king of Rome (conventional dates: 640-617 B.C.), Ancus Marcius remained a shadowy figure of whom virtually nothing was known. His later portrait is modelled partly on Numa whose religious rituals he reputedly revived. He is also attributed military successes against neighbouring states, the bridging of the Tiber, and fortification of the Janiculum. His supposed settlement at Ostia (to exploit the salt-beds) has not yet received archaeological confirmation.

The Tarquins were conventionally the fifth (616-579 B.C.) and seventh (534-510 B.C.) kings, but their reigns are so thoroughly confused that tradition evidently offered no reliable detailed information between them. That thr family (perhaps from Caere rather than Tarquinia) ruled twice is credible, but their chronology and the details of their accessions are unreliable. Wether either was dependent on outside support is unknown, although a Gnaeus Tarquinius from Rome was apparently involved with other Etruscan associates, in Vulcetatn Affairs.

Later sources ascribed to one or both kings measures which (whoever their author) certainly reflect Rome’s development as a city-state under Etruscan influence in the sixth century B.C.: the drainage and organization of the Forum, the Circus and games, the (re-modelled triumph), the fasces and other insignia, The Capitoline temple, and Sibylline books. Both kings are also attributed a significant part in Rome’s external conquests, notably Superbus who establishes Roman hegemony in Latium. Priscus’ portrayal is largely favourable but Superbus supposedly his son or grandson, has acquired the characteristics of a Greek tyrant, to justify his expulsion by L. Junius Brutus.

Servius Tullius was the sixth king of Rome (conventional dates: 578-535 B.C.). Despite his suspect identification by the Emperor Claudius with Mastarna, an associate of Caeles Vibenna and Roman stories of his servile origins (derived from his praenomen), the rela basis and political tenor of his rule are purely conjectural. The tribal system and centuriate organization, ascribed to him, mat date from this period in a rudimentary form, reflecting, respectively, Rome’s urban development and adoption of hoplite tactics: His establishment of the Aventine shrine of Diana as a Latin cult centre would also mirror Rome’s growing importance, and archaeological finds support a sixth-century date for his temples of Fortuna and Mater Matuta (though is fortification wall is controversial). It is uncertain that all this was the work of a single king.